Mohammed Abubakar Atiku, son of former Vice President Atiku Abubakar who tested positive for coronavirus, has dismissed claims of Governor Mohammed Bala of Bauchi State, contracting the virus from him after a handshake when they met on board an Aero Contractors aircraft.

Recall that after Mohammed tested positive for the virus, Bala’s spokesperson Mukhtar Gidado announced the governor was self-isolating, citing his meeting with the son of the former Vice President.

“This is to inform the general public that the results of the six initial tests carried out by the Nigeria Center for Disease Control (NCDC) on His Excellency, Senator Bala Mohammed, his family and aides that accompanied him to Lagos is (sic) out.

“Of the six initial tests carried out, one sample was confirmed positive of COVID-19. The positive result happens to be that of His Excellency, Senator Bala Abdulkadir Mohammed, the Executive Governor of Bauchi State.

“At this point, it should be noted that the governor is on self-isolation as his doctors and officials from the Nigeria Center for Disease Control (NCDC) have taken full charge of his quarantine.

“His Excellency solicits for prayers from all and requests that all those who had contact with him or anyone known to have the same medical condition to go for test immediately in order to avert further spread of COVID-19 epidemic.

However in a Whatsapp conversation made available to LIB, Atiku’s family debunked claims of Mohammed shaking Governor Bala on board the aircraft. The Bauchi State Governor was accused of not self-isolating upon his return from Germany on March 15.

Mohammed did not shake hands with Governor Bala Mohammed. He sat on a seat across the aisle on the Aero Contractors flight from Lagos to Abuja. Governor Bala was in Germany until the 15th of March 2020 and did not go into self isolation.

The claim was backed by Governor Bala’s tweet in which he announced his meeting with leaders, policy makers and industrialists in Germany on March 13. It is also suspected that President Buhari’s Chief of Staff, Abba Kyari got infected with the virus during a recent trip to the European country.

Here is Governor Bala’s tweets below; 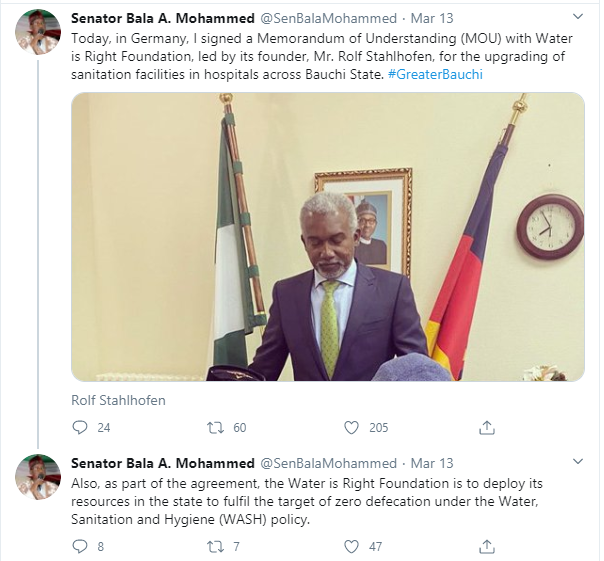 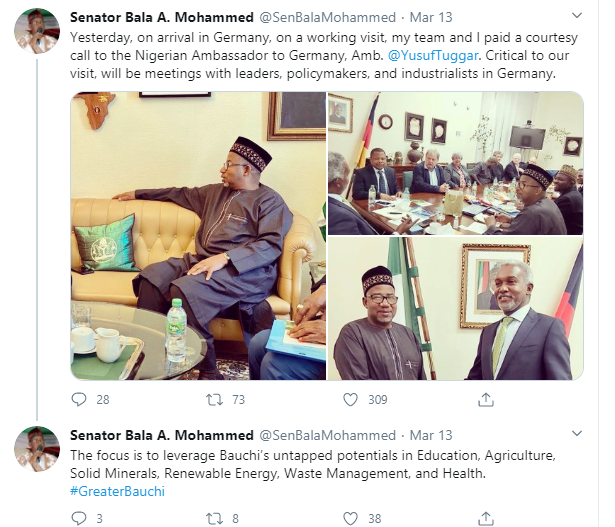